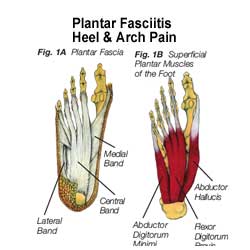 Plantar fasciitis, a term used to denote inflammation of the plantar fascia that surrounds the heel and arch, is one of the most common occupational and sport related causes of foot pain.

SYMPTOMS
The initial chief complaint is typically a sharp pain on the heel and arch of the foot, particularly noticeable with the first few steps in the morning or after long time periods of non-weight bearing. Usually, after walking approximately 10 to 12 steps the plantar fascia looses up and the pain gradually diminishes. However, symptoms may resurface as throbbing, a dull ache, or a fatigue-like sensation in the arch of the foot after prolonged periods of standing, especially on unyielding cement surfaces. 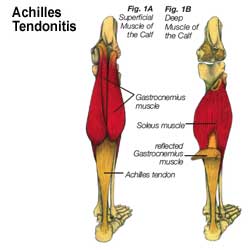 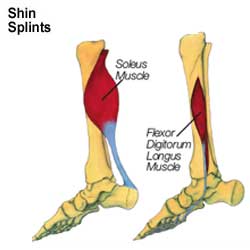 Shin splints is an injury of the lower leg that often afflicts athletes. Generally, symptoms include pain on the anterolateral or posteromedial surfaces of the shin. There is a great deal of research on the treatment and prevention of shin splints, and based on extensive research, several hypotheses have been proposed for its pathophysiology; however, the exact cause of shin splints remains unknown. This paper explains the anatomy of the lower leg and biomechanics of gait. It presents possible etiologies and risk factors for shin splints, and it reviews options for treatment and prevention. Its conclusion, based on extensive literature review,reveals that most cases of shin splints respond favorably to conservative care. Such care generally includes home exercise, training and equipment modifications, and treatment by a skilled practitioner. However, in more advanced cases surgery may be necessary. 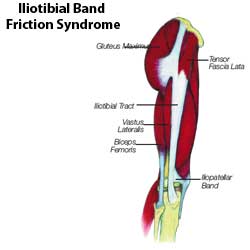 Iliotibial band friction syndrome (ITBFS) is an inflammatory, non-traumatic, overuse injury of the knee affecting predominantly long-distance runners. A home exercise program that includes a flexibility and strength conditioning routine and modified training recommendations can aid in the treatment and prevention of further injury. Most cases of ITBFS can be treated successfully with conservative therapy. Recalcitrant cases of ITBFS may require other interventions such as cortisone injections and/or surgery.

One of the most common sport-related injuries is a hamstring pull or strain. The hamstring, a group of four muscles in the back of the thigh, can be felt stretched as you bend forward to touch your toes. Three of the four hamstring muscles, the semitendinosis, semimembranosis, and the long head of the bicep femoris, cross both the hip and knee joint and are the true hamstring muscles. At the top, these muscles have a common attachment to the ischial tuberosity (a bone at the bottom of the pelvis), and at the bottom, the tendons of these muscles then attach to the tibia and fibula (bones below the knee) (Figure 1). The other hamstring muscle, the short head of the bicep femoris, only crosses the knee joint.

Patellofemoral Syndrome (PFS), pain in the front of the knee, is one of the most common complaints of athletes and active people. PFS is typically caused by a repetitive strain injury or a single traumatic event. Repetitive strain injuries occur when micro-tears in the muscles, tendons and ligaments surrounding the knee joint occur faster then tissue repair, while a single event is often a fall or other athletic impact. PFS is usually characterized by a dull aching pain on the front, bottom, or top of the knee, sometimes accompanied by swelling of the knee joint. Failure to treat this injury appropriately may lead to increased pain symptoms, further damage to the structures stabilizing the knee joint, and eventually an inability of the injured knee to support body weight.

The anterior cruciate ligament (ACL) is a tough fibrous structure that attaches the tibia
(lower leg bone) to the femur (thigh bone) (Figure 1). This ligament helps to stabilize the knee by preventing excessive forward movement of the tibia on the femur. ACL injuries commonly occur in athletes participating in sports such as football, basketball, soccer, and volleyball, where movements such as cutting, pivoting, single leg landing and rapid decelerations are routinely performed. Tearing of the ACL is most commonly caused by landing awkwardly or cutting on a fully extended or slightly flexed leg with the foot turned outward (Figure 2).

Ankle sprains are the most frequent injuries sustained by athletes. Literature reveals that ankle sprains may account for approximately 20% to 40% of all athletic injuries. Eighty-five percent of ankle sprains are caused by excessive inversion. When the ankle rolls inward at a high velocity, it may lead to stretching or tearing of the lateral ligament complex.

Dubin Chiropractic is conveniently located in Quincy, MA across from the Quincy Center T. Validated parking is available.