Carpal tunnel syndrome is a common occupational injury resulting from tasks that involve repetitive extension and flexion of the fingers, such as typing on a computer keyboard (Fig. 1).

Symptoms of carpal tunnel syndrome are weakness in grip strength; pain and stiffness in the forearm, wrist, hand; and numbness/tingling traveling from the front of the forearm into the thumb, index finger, middle finger, and one-half of the ring finger. The carpal tunnel is located at the wrist. Passing through this tunnel are nine tendons and one nerve: four tendons of the flexor digitorum superficialis, four tendons of the flexor digitorum profundus, the tendon of the flexor pollicis longus, and the median nerve.

Repetitive strain injuries, or overuse injuries of tendons and muscles, are very common and are both treatable and preventable. The severity of these injuries is directly related to the number of repetitions of a particular activity and the technique utilized while performing that activity. The severity is also proportional to the strength of the muscles utilized as compared to the force of the activity. The “weekend warrior” who attempts to participate in a sport without any prior training is a good candidate for predisposition to repetitive strain injuries. His or her technique in performing the sport would probably be poor, and the muscles utilized would not be conditioned to deal with the repetitive force of the activity. This kind of overuse causes small tears in the muscles and tendons. If tissue injury occurs faster than tissue repair, pain and eventually weakness would be experienced in the region of the damaged tissues. 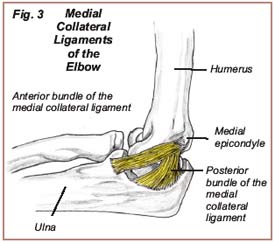 During the cocking and acceleration 1 phases, the wrist is slightly extended, stretching the flexor muscles of the forearm-the flexor digitorum superficialis, flexor carpi radialis, and flexor carpi ulnaris (Fig. 2A)-and an increased “valgus strain” is placed on the medial collateral ligament. From acceleration 1 to acceleration 2, the wrist goes from a slightly extended position to a flexed position, causing a forceful contraction of the forearm flexors. The tendons attached to these forearm flexors have a common insertion point on the medial epicondyle, an outgrowth of bone found on the inside and bottom of the humerus (arm bone). When these muscles are under-prepared and stretched in this way, tension develops in the tendons at the insertion point on the medial epicondyle. Overuse may cause microtears in these structures, causing pain at the medial epicondyle in the elbow.

Impingement syndrome is a shoulder disorder characterized by a dull aching on the front and outside of the upper part of the arm that sometimes radiates to the elbow. Sleeping on the injured shoulder is painful, and when raising the arm by the side, the pain can be sharp and stabbing in nature. Impingement syndrome is common in individuals participating in sports such as volleyball, swimming, basketball, tennis, and baseball, and in occupations requiring arm movements above the shoulder or head. These activities may cause a repetitive strain injury to the muscles surrounding the shoulder, leading to faulty joint motion and compression on tendons in the shoulder, resulting in impingement syndrome. An explanation of the biomechanics of the shoulder will make it easier to understand the causes of impingement syndrome and how to treat and prevent it.

Dubin Chiropractic is conveniently located in Quincy, MA across from the Quincy Center T. Validated parking is available.